BBC at it again. More lies and deception

September 26, 2014
In the last few days the BBC have published a poll taken by icm that says the support for welsh independence is 3%. That's right according to the BBC only 3% of people in wales support Independence. BBC and icm were the same tag team that give us the 5% that politicians and the BBC themselves loved to throw about at every opportunity.


Support for Welsh independence has fallen to its lowest recorded level in the wake of the Scottish referendum, according to a poll for BBC Wales.
The survey, carried out days after Scotland voted "No", found 3% wanted to Wales to be independent..
Lets look at the results of this poll in more detail. 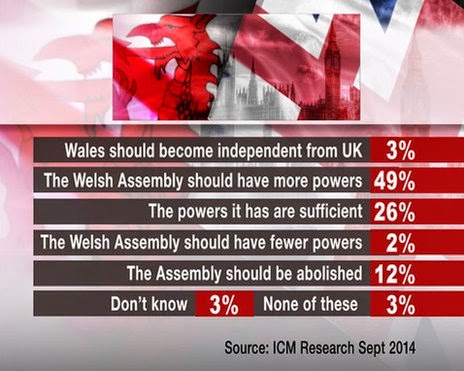 Its obvious they asked the 1006 people if the welsh assembly should have more powers and decided to throw this question in along with 5 other questions (7) in total.  This can not honestly be taken seriously. Any "relevant" poll on the independence question should only have 2 options to give us any chance of getting an idea on the support for independence in wales.
This is the BBC though and as they did with the 5% poll made sure as many people as possible seen their headline  of ...

what makes this look even more pathetc is recently polls taken by the likes  you gov, faces for business have shown support for independence in wales is at a record high.

By Tom Parmenter, Sky News Correspondent
A new poll suggests support for Welsh independence has slightly increased during the Scottish referendum campaign.
Traditionally levels of interest in independence for Wales have been around 10-15%, but the latest poll found it now stands at 17%.
The political debate in Wales has been energised in recent weeks with hundreds of people taking part in a rally in Cardiff on Saturday backing the Yes vote in Scotland.
Then you have this .....

On Thursday 18th September people in Scotland will vote on whether Scotland should stay part of the United Kingdom, or whether they become an independent country.  The negative affects on local businesses are a key aspect of the anti-independence debate. The Sunday Telegraph led a poll of FTSE 100 chairmen where 80% believe that a Yes vote would negative economic repercussions on the UK.
With this in mind, we turn our attention to Wales to see if the Welsh population have been inspired by the Scottish referendum to reconsider the state of their independence.

The BBC conducted a poll in February showing that 5% of Welsh voters were in favour of independence. However, according to a more recent YouGov survey for ITV Wales, 17% of people support Welsh independence.

In order to find out the current opinion in Wales, we have just asked 1000 Welsh people whether they think Wales should be independent?

To me its blatantly obvious the bbc are going out of their way and wasting taxpayers money on proving there is no "appetite" in wales for independence. Why they are doing this is anyone guess but as above shows there is no credibility in their findings whatsoever. They know this but will still use this poll as often as they can.
Also be prepared for the usual unionist mps to brand their new favourite figure about.

Ps, my English isn't very good. here is the link to another  blog that has done a better job of rubbishing this poll
welsh not british

daily wales has also run a story on this
daily wales