Do more people speak welsh than the 2011 census told us?

November 22, 2015
I coped this from a welsh government pdf file.

How many people in Wales speak Welsh?

The 2011 Census is the key source of information about the number of people who can speak Welsh.

The Welsh Language Use Survey was not intended to provide new statistics on the number of people who say they can speak Welsh, but rather to provide a picture of how fluent Welsh speakers are, and how they use the language.

Question 17 in the 2011 Census asked people living in Wales:

The 2011 Census showed that 19.0 per cent of people 3 years old and over living in Wales said they could speak Welsh:
ten years earlier the figure from the 2001 Census was 20.8 per cent.
The 2001 figure showed an increase compared with the 1991 Census, halting a decline that had been seen throughout the twentieth century.

Welsh language ability and frequency of use is also collected in the Annual Population Survey (APS).
The APS combines results from the Labour Force Survey (LFS) and the boosts to the LFS funded by England, Wales, and Scotland.

The APS asks the respondents whether they can speak Welsh, and if they can, how often they speak it.
The Labour Force Survey (LFS) is a survey of the employment circumstances of the UK population; it also collects some basic demographic data.
It is the largest regular household survey in the UK and provides the official measures of employment and unemployment.

The question about Welsh language ability included in the APS, the National Survey for Wales and the Welsh Language Use Survey is identical to that included in the Census.
Despite this, the proportion of people who state that they speak Welsh is higher for all of these surveys than it is for the Census.

The chart below shows how the numbers vary by age according to each of these alternative sources. Chart 1: Percentage of people who speak Welsh by age and source 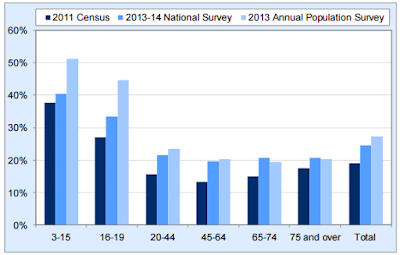 Differences in how these surveys and the Census are carried out are likely to have affected the results.
The Census used a self-completion questionnaire for all people, the National Survey used face-to-face interviews of one adult aged 16 and over.
The APS uses some face-to-face interviews and some telephone interviews of adults aged 16 and over.
In interviewer-led surveys, respondents may feel more likely to report that they speak Welsh. 20 8.8 It should also be borne in mind that speakers’ assessment of how well they speak a language can be quite subjective.
For some people,  despite speaking it regularly, may say that they can’t speak it if they feel that they are more comfortable speaking another language.

When respondents are faced with only one question, in an official statutory survey, they must make a categorical decision about whether they speak Welsh or not.
Where an interviewer is present, the respondent may feel more able to describe their ability levels in more detail with the interviewer and the interviewer may encourage respondents to say that they are able to speak Welsh, so that they can provide more details about their ability in the subsequent questions.

Indeed for the National Survey, interviewers were briefed to code people who hesitated over their answer to the question (owing to the fact that they did have some Welsh-speaking ability) as Welsh-speaking (around 4 per cent), because there was a subsequent question on level of ability.

For these reasons, some respondents recorded as speaking Welsh in the National Survey or the APS might have reported that they were not Welsh-speaking when completing the Census questionnaire.

As stated above, the 2013-14 Welsh Language Use Survey and the National Survey itself gave different estimates for the percentage of Welsh speakers (23 per cent and 24 per cent respectively). 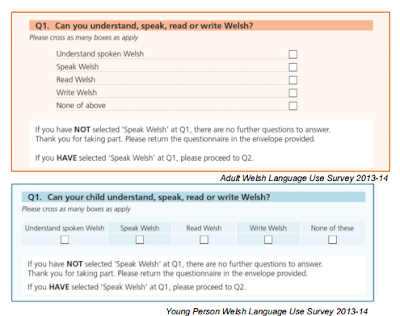 The reason for the discrepancy between these two surveys is that in the National Survey the respondent stated who they believed could speak Welsh in their household.

Answers to these questions revealed that not everyone agreed with the original respondent’s opinion about the Welsh language ability of other members of the household. Although initially identified as Welsh speakers, some respondents subsequently stated that they could not speak Welsh. Consequently, the first estimate provided by the National Survey decreased for the Welsh Language Use Survey.